The brief history of RVs in America and the world

It all began with the end of World War I when Americans mainly began to take tents, beds and cooking facilities in their family car to go exploring their homecountry. 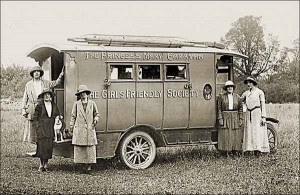 In the 1920s first RVs – or rather RV likes – were built. These early versions were mostly simple wooden house-like structures built upon a simple Model T Chassis (http://www.barefootsworld.net/ford-t-chassis.html). The goal was to create a home-to-go one the road.

One of the first camping clubs was “Tin Can Tourists association”. The name derives from “Tin Lizzy” which is a common name for the Fort T Model. The first RV lovers were adventurers who drove on muddy roads, heated tin cans of food on gasoline stoves and had to bath in cold water. The road infrastructure was not yet well established – camping was for the brave.

The campers in the 1930s were inspired by the design of aircraft. Water and electricity supply was added to the models and travelers now had convenient beds to rest the night in, someitmes even separate dinettes a flush toilet and way more comfort than ever before.

The growing popularity of camping nourished the RV industry and the number of campinggrounds grew. RV industry flourished even more after World War II. After years of war the call of the open road had to be answered.

Many of today’s manufacturers of RVs started business from the 1950s where camping began to become more and more diverse. Technological advances, aerodynamic design and comfortable interior solutions paved the way for the successful future of mobile homes, camping and fully integrated recreational vehicles. 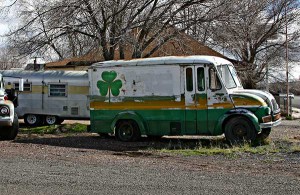 The 60s were the breakthrough of RVs – now commonly divided into two types: The motorized RV which got the name “Recreational Vehicle” those days and the car-towed mobile homes or caravans.

The marked evolved greatly from the 70s until the late 90s.

Today unparalleled diversity of interior configurations, types of construction, sizes and layouts makes RVs affordable and suitable to almost every one. Cheap used RVs and relatively stable prices for current models are a sure sign of the ongoing success of RVs.

(The brief history of RVs in America and the world)